It’s Cristi’s last month at Innobyte. As he’s an awesome colleague (and we know that his heart belongs to Innobyte), he wanted to give us a present: Innobyte’s own Capture The Flag competition.

Cristi has been to a couple of hacking competitions and a lot of conferences and both DefCamp and DefCamp Capture the Flag just stuck.

Thus, this competition served as inspiration for Innobyte’s CTF. He built this project as a food-for-brain for our  employees and friends. But things escalated quickly 🙂

He had only 2 weeks to prepare everything. He started by grabbing its own virtual machine so he can work on this project no matter where he is.

He developed a website and started working on the challenges – that, as you well know, make all the fun. He wrote them from scratch and from past CTF experiences. trying to give our colleagues an awesome experience.

As we all have jobs and busy lives, he set the contest to start on Friday at 6 PM and to last until Monday (today) at 10 AM. This proved to be was awesome, because every team could manage its efforts accordingly to their schedules.

Once the website (and registrations) was live, we shared the joy with our community on our Facebook page and several other communities we are members of. We panicked a bit when we saw the big number of registrants and we tried increasing the security of other ongoing projects.

Cristi supervised everything – we still wonder if he managed to get any sleep – and gave constant hints and fixed small bugs that appeared on the way.

What started as a small internal competition, managed to out raise our expectations by 2000%. 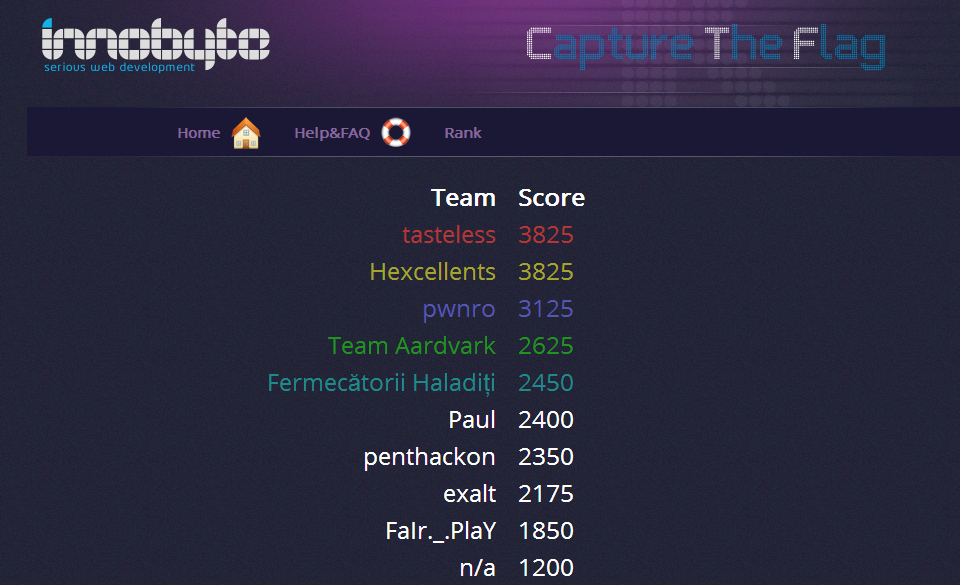 The winning teams were Tasteless (SE), Hexcellents (RO), Pwnro (RO), Team Aardvark (RO) and Fermecătorii Haladiți (RO). The first two teams both managed to do all but ONE challenge so congratulations to them!

And when it comes to prizes, we have the following:

Tasteless wins an Amazon Voucer of £100. The following 4 teams win an awesome pack of T-Shirt + Mug that will remind them forever of this weekend we… spent together. (all winners will be contacted in the following week to get their hands on the awards).

We had 46 teams that have done at least one challenge. Out of which over 10 teams with 5 challenges done summing over 25% of the available score.

We had a colleague that spent his whole weekend at the office and tried to burn as many challenges as he could – and he got over 2000 points – so great job, Cata!

We had some buzz generated (Some feedback on our event’s page, Some Google Searches, some community discussions). We also managed to get a lot of directed and varied attacks on the competition website, which definitely made things more interesting than expected.

We’re really glad to see that we managed to hype people all across the globe with our small competition. And we promise you, next time we will be more prepared! 🙂

Firstly, Cristi for all his endless nights & showing us what’s the test of a Capture The Flag Competition.

Secondly, we thank Andrei and DefCamp Community. All of your feedback is well taken and we hope to get serious together in the near future!

Ps. Solutions will be published soon on this blog!

5 thoughts on “Innobyte Capture The Flag”